Below is part of a conversation transcribed from tape recorded interviews with my grandfather I did as a child. He tells me about how he formed his partnership with Ben Schwartz of Schwartz & Benjamin, Inc. prior to leaving  Sigman & Cohen, the first shoe company he helped start.

“There was a mutual friend of Mr. Schwartz’s and myself that knew both of us and uh he use to sell supplies that use to go into shoes like counters and shanks.

He says, you know Ben Schwartz, don’t you? I says yeah. Well he’s not very happy with his two partners, he wants to get out. And uh we got together and spoke the thing over. He heard about me and all I could do and he’d met me a couple times down at the club…He decided to break up with his two partners cause he couldn’t get along with them. One of them especially. He had fist fights on the floor. See?

Ben Schwartz was a bookkeeper originally and he was a terrific salesman like your dad.

So uh he went and spoke to Max Wallacher his old boss about me, and a few other people. Max Wallacher says to him, he says if you two can get along, he says you can be the biggest men in this town in the shoe business. He says you (Ben Schwartz) in the selling end of it and Ben (my grandfather) running the factory. He’s a good factory man, designer – but you’ve got to learn to live with one another, and we got a long fine – When I first told him I wanted to get out, he says no, he wouldn’t let me. Now in all those years, we never had a fight. We never had an argument.” 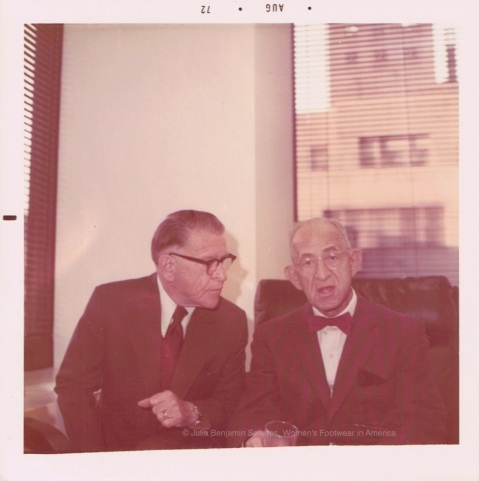 What is the rule about wearing white?

It seems every Spring and Summer I notice my friends with Southern roots get out their white pants. The only fashion rule I remember from my eclectic childhood was no shorts in Manhattan – period. Looking back through family films and photos it’s clear that this was a rule strictly followed at one time. After some googling I found Memorial Day to Labor Day is the rule and no white clothes after Labor Day. I also learned that Emily Post gave the ok to continue wearing white after Labor Day.

Why We Can’t Wear White After Labor Day – Time Magazine

How to Wear White After Labor Day: Ten Pieces for Fall – Vogue 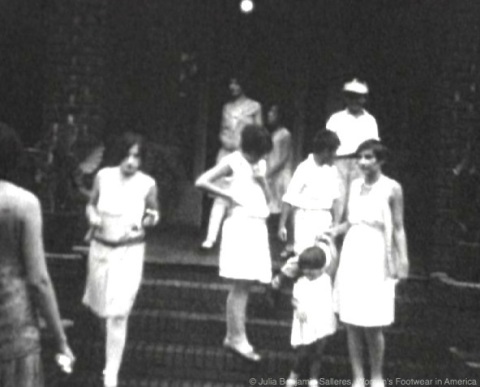 My grandmother holding my dad.

You are currently browsing entries tagged with Schwartz & Benjamin at Women's Footwear in America.